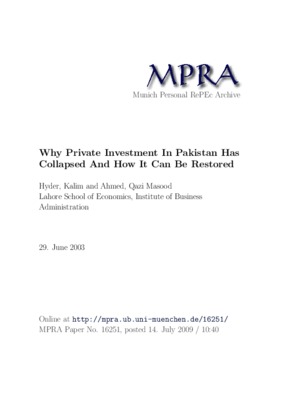 By Kalim Hyder and Qazi Masood Ahmed
Get PDF (184 KB)

The purpose of this paper is to analyse the decline in private investment and formulate a comprehensive strategy to overcome this problem, which is the main cause of deceleration in the growth momentum of Pakistan’s economy. Due to lack of investor confidence, private investment has reached its lowest point in the recent economic history of the private sector led growth phase (1978 to 2002) in Pakistan. This paper argues that economic as well as non-economic factors are responsible for this declining investment. Economic policies are formulated in such a manner that the short-term objectives of lowering the fiscal and trade deficits were to some extent achieved but overall economic performance and investment were ignored. In order to control external trade deficits, a policy of devaluation increased the cost of production through an increase in prices of imported raw material especially of plant and machinery. Higher real interest rates due to excessive public borrowing that were due to the failure in reducing fiscal deficits has resulted in financial crowding out and has corroded the savings that might be used to finance private investment. The unexplained part of private investment that is not determined by economic factors can be attributed to non-economic factors, which include internal and external shocks. These shocks start from the sanctions which were imposed after the nuclear blast. Events following that initial shock like the freezing of foreign currency accounts, the military coup, the harassment of the partially successful accountability drive of the military government, the 9/11 incident, the Afghan war and tensions on the Pak-India border have complemented the shock. A comprehensive programme is required to boost private investment and for the restoration of investor confidence. Therefore, an economic package is recommended in this paper that consists of incentives that relax the supply side constraints by reducing cost of production as well as demand-enhancing efforts. It is the best time to introduce a strategy to increase investment activities in the economy because of the high level of foreign exchange reserves, the rescheduling of foreign debt and the drastic reduction in interest rates which have reduced the debt servicing cost. Investor confidence can be restored by accelerating economic activities through following policies that can reduce the cost of imported raw material, bring down the real interest rates in the economy, increase expenditures on infrastructural development activities and that can also increase the availability of conditional subsidised credit for the export oriented small scale industries so that there is an improvement in the quality of the final product. This would make it more competitive in foreign markets.Private Investment; Development; Growth; sector wise Investment