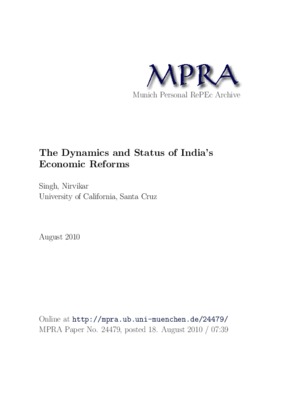 The Dynamics and Status of India’s Economic Reforms

This paper considers the status of economic reform in India, to understand which further reforms might be desirable, and why they have not been successfully introduced or implemented. Rather than provide a list of reforms that “should” be undertaken, the paper attempts to understand the political economy of the process of economic reform in India, and how that process plays out with respect to different sectors of the economy, or different areas of potential economic reform. The discussion includes the roles of institutions, interest groups and ideas in driving reform.India; economic reform; political economy; interest groups; rent-seeking; institutions