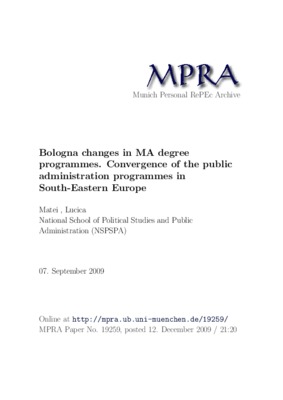 The provisions of Bologna Declaration are ongoing implemented in several South- Eastern European states, members or non members of the European Union. For most states, important restructuring processes for the legal framework and organisation system of higher education were imperative. At the same time, the content of the programmes for all the three cycles was revised in order to follow closely the finalities stipulated in the European documents, substantiating the European Higher Education Area. In this context, the current paper aims to carry out the comparative analysis for the actual level attained by the mentioned states in implementing Bologna Process, with special attention towards higher education in the area of public administration. Research teams, led by the author of this paper have analysed the degree of curricular compatibility of the Bachelor programmes from various European states. This time, the research will focus on describing the process of convergence related to the delivery modalities and the content of the Master programmes in the area of public administration, corresponding to the second cycle of Bologna system. The indicators of convergence will be defined related to the standards of evaluation,used by EAPAA for accreditation of the public administration programmes.Bologna process,M A public administration programmes,convergence