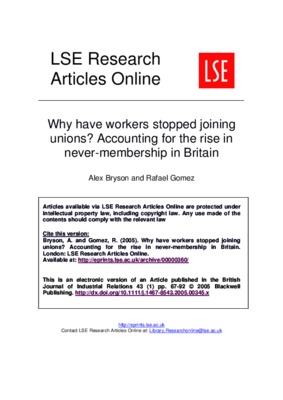 Why have workers stopped joining unions? Accounting for the rise in never-membership in Britain.

By Alex Bryson and Rafael Gomez
Get PDF (756 KB)

This paper tracks the rise in the percentage of employees who have never become union members (‘never-members’) since the early 1980s and shows that it is the reduced likelihood of ever becoming a member rather than the haemorrhaging of existing members which is behind the decline in overall union membership in Britain. We estimate the determinants of ‘never-membership’ and consider how much of the rise can be explained by structural change in the labour market and how much by change in preferences among employees. We find a similar trend in the unionised sector, indicating that the rise in never membership for the economy as a whole is not linked solely to a decline in the number of recognised workplaces.