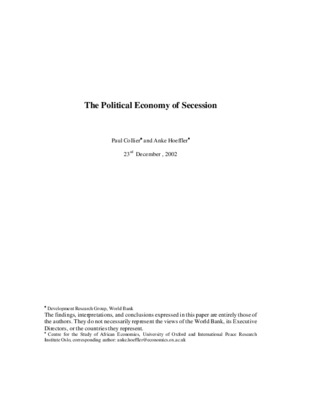 The Political Economy of Secession.

By Paul Collier and Anke Hoeffler
Get PDF (175 KB)

Secessionist movements present themselves to the global public as analogues of colonial liberation movements: long-established identities are denied rights of self-determination by quasi-imperial authorities. Self-determination is presented as the solution to the challenge of peaceful coexistence between distinct peoples. The global public not only accepts this message but reinforces it: both Hollywood and diasporas relay it back to populations in developing countries. In this paper, we will argue that the discourse of secessionist movements cannot be taken at face value. We will suggest that a more realistic characterization of secessionist movements is that their sense of political identity is typically a recent contrivance designed to support perceived economic advantage, if the secession is successful, and facilitated by popular ignorance.