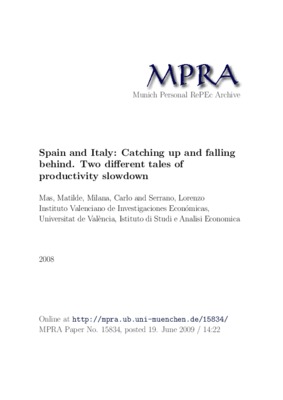 Spain and Italy: Catching up and falling behind. Two different tales of productivity slowdown

The paper presents a first set of results for Spain and Italy using the EUKLEMS database. It emphasizes the different paths followed by the two countries over the last thirty five years, even though they still have many features in common. The motivation behind this paper is the poor productivity performance that the two countries have shown recently. The general overview details the factors underlying the process of per capita income convergence. Productivity performance is highlighted as the driving factor of convergence, deserving the greatest attention from different perspectives: the contributions of the different sources of productivity growth, which make use of the growth accounting framework; the impact of the structural change undergone by the two countries while moving from economies with still important shares of the agricultural sector to a more modern one; or the responsibility of poor productivity improvements in given industries. The changing composition of labour also deserves a detailed analysis because of its importance in productivity over the period analyzed.Growth, productivity, Growth accouting