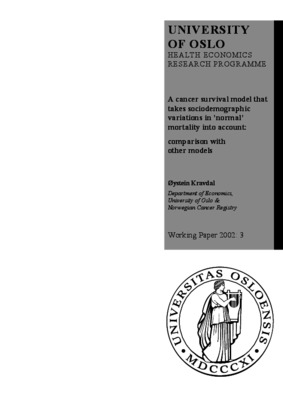 A cancer survival model that takes sociodemographic variations in 'normal' mortality into account: comparison with other models

Study objectives - Sociodemographic differentials in cancer survival have occasionally been studied by using a relative-survival approach, where all-cause mortality among persons with a cancer diagnosis is compared with that among similar persons without such a diagnosis (’normal’ mortality). One should ideally take into account that this ’normal’ mortality not only depends on age, sex and period, but also various other sociodemographic variables. However, this has very rarely been done. A method that allows such variations to be considered is presented here, as an alternative to an existing technique, and is compared with a relative-survival model where these variations are disregarded and two other methods that have often been used. Design, setting and participants – The focus is on how education and marital status affect the survival from twelve common cancer types among men and women aged 40-80. Four different types of hazard models are estimated, and differences between effects are compared. The data are from registers and censuses and cover the entire Norwegian population for the years 1960- 1991. There are more than 100 000 deaths to cancer patients in this material. Main results and conclusions - A model for registered cancer mortality among cancer patients gives results that for most, but not all, sites are very similar to those from a relative-survival approach where educational or marital variations in ’normal’ mortality are taken into account. A relative-survival approach without consideration of these sociodemographic variations in ’normal’ mortality gives more different results, the most extreme example being the doubling of the marital differentials in survival from prostate cancer. When neither sufficient data on cause of death nor on variations in ’normal’ mortality are available, one may well choose the simplest method, which is to model all-cause mortality among cancer patients. There is little reason to bother with the estimation of a relative-survival model that does not allow sociodemographic variations in ’normal’ mortality beyond those related to age, sex and period. Fortunately, both these less data demanding models perform well for the most aggressive cancers.Cancer survival models; education; marriage