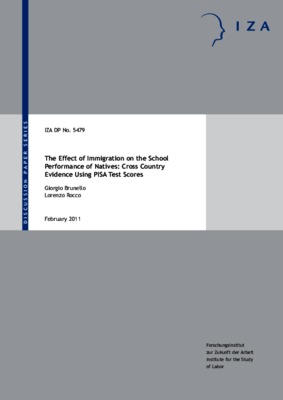 By Giorgio Brunello and Lorenzo Rocco
Get PDF (120 KB)

We study whether a higher share of immigrant pupils affects the school performance of natives using aggregate multi-country data from PISA. We find evidence of a negative and statistically significant relationship. The size of the estimated effect is small: doubling the share of immigrant pupils in secondary schools from its current sample average of 4.8 percent to close to 10 percent would reduce the test score of natives by 1.32 to 1.96 percent, depending on the selected group of natives. There is also evidence that – conditional on the average share of immigrant pupils – reducing the dispersion of this share between schools has small positive effects on the test scores of natives.immigrants, school performance, natives