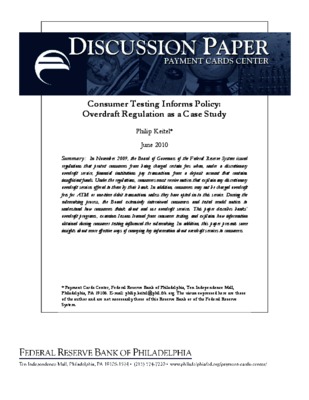 In November 2009, the Board of Governors of the Federal Reserve System issued regulations that protect consumers from being charged certain fees when, under a discretionary overdraft service, financial institutions pay transactions from a deposit account that contains insufficient funds. Under the regulations, consumers must receive notices that explain any discretionary overdraft services offered to them by their bank. In addition, consumers may not be charged overdraft fees for ATM or one-time debit transactions unless they have opted in to this service. During the rulemaking process, the Board extensively interviewed consumers and tested model notices to understand how consumers think about and use overdraft services. This paper describes banks’ overdraft programs, examines lessons learned from consumer testing, and explains how information obtained during consumer testing influenced the rulemaking. In addition, this paper presents some insights about more effective ways of conveying key information about overdraft services to consumers.Consumers' preferences ; Overdrafts ; Regulation