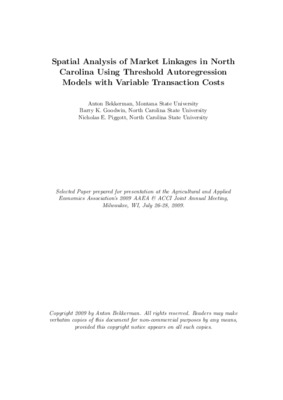 In North Carolina, where soybeans and corn are the two primary crops, the recent increase in the demand for U.S. corn has triggered a shift of farm acreage from soybeans to corn, leading to a rapid rise in prices of both commodities. However, the rate of the price changes, as well as the price level, is significantly different in markets that are located in different parts of the state. This study extends the literature that examines linkages between spatially separated markets by using a threshold autoregressive model with a less restrictive assumption for estimating the transaction cost neutral band -- the band within which trade is not profitable. This generalization allows the neutral band of transactions costs to change according to various external factors, including fuel costs and seasonality. The estimation results indicate that for longer time series data, variable thresholds models statistically outperform the constant thresholds specification, and may provide a better representation of corn and soybean price data. Additionally, impulse response functions that use the asymmetric variable threshold model parameters indicate that the magnitude of the shock as well as the time-to-price-parity-equilibrium in the linked markets may be underestimated if a constant thresholds specification is implemented.threshold autoregression, spatially separated markets, impulse response, neutral band, Demand and Price Analysis, Marketing, Q11, Q13,