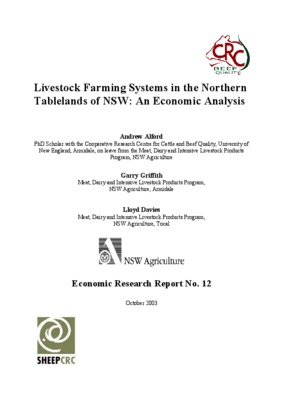 Livestock Farming Systems in the Northern Tablelands of NSW: An Economic Analysis

The Northern Tablelands region of New South Wales covers an area of approximately 3.12 million hectares including 2.11 million hectares occupied by some 2300 agricultural establishments producing agricultural commodities valued at more than $220 million. Sheep and wool production and cattle production are the dominant agricultural enterprises. In this Report, a whole-farm model of a representative livestock farming system in the Northern Tablelands is developed. Whole-farm economic models of the relevant farming system are a useful first step in understanding the nature of the biological and economic constraints facing producers in their decision making in relation to their choices of inputs and outputs. Such models are also useful in relation to more general concerns such as the expected impacts of investments in new technologies applicable to grazing systems, or of external events such as drought conditions or a depreciation in the exchange rate. A whole farm budget for a representative farm includes a statement of assets and liabilities, based upon estimates of the various capital items including land, livestock and plant and machinery and farm structures. There is also an annual operating budget that includes the cash income and costs associated with each of the farm enterprises as well as the fixed costs incurred for running the farm over the year to derive the farm cash income. Allowances for depreciation and interest costs are deducted from farm cash income to determine farm operating surplus. No family labor allowance is subtracted, so the resulting farm operating surplus represents a return on owner-operated labor, management and farm assets. Pasture costs are not apportioned to the specific animal enterprises and therefore appear as separate negative gross margins. Similarly, supplementary feeding costs and fodder conservation activities are listed as a separate negative gross margin. A representative farm model of the Northern Tablelands livestock farming system was developed based on ABS and ABARE data on the relevant industries, from simulations with a linear programming model, and from discussions with local graziers and extension officers. The farm comprises 920 ha of which about half is native pasture and about half is introduced pasture. This farm runs a flock of 1,108 first-cross ewes, a flock of 1,732 Merino wethers and a 127 cow herd producing 18 month old steers suitable for the heavy feeder steer market. Using average prices and costs over an extended period of time, the annual operating budget for the farm shows a total gross margin of $86,191 and total overhead costs for the year of $24,720. This results in a farm cash income of $61,471 and a farm operating surplus of $37,471 after depreciation and interest costs. The statement of assets and liabilities shows total assets of the farm to be $1,498,060 and liabilities of $100,000 which equates to an equity level of 93.3 per cent. The farm operating surplus achieved on this model farm as a percentage of the owner's equity is 2.7 per cent. This represents a return on operator and family labor, management and equity. Low returns to equity are typical of Australian broadacre agriculture. Other scenarios examined included whole-farm budgets based on 2002 actual market prices and on 2003 expected prices. Given the relatively high prices for sheep relative to cattle in these years, the representative farm would be more profitable running 1,558 first-cross ewes and 3,595 Merino wethers. Such an enterprise mix would achieve a farm total gross margin of $165,736. After overhead costs, depreciation and interest costs there would be a farm operating surplus of $111,818. Based on equity totaling $1,472,870, this operating surplus would represent a business return on operator labor, management and equity of 8.1 per cent. However, while the Northern Tablelands representative farm model would suggest that greater profits could be achieved from changing enterprises as commodity prices change, in practice various biological lags, infrastructure, financial and management constraints prevent regular changes in farm enterprises. In fact, diversification amongst a variety of farm enterprises between various sheep and cattle enterprises as evidenced in the Northern Tablelands is one management response to this commodity price variability. A hypothetical new improved-pasture technology suggested by researchers, involving the selection of pasture varieties with improved winter pasture growth, was examined using the whole-farm model. If the existing 450 ha of improved pasture was replaced by a new variety that gave a 10 per cent increase in winter pasture growth, this would result in a 4.9 per cent increase in farm total gross margin. This corresponds to an increase in farm cash income of 6.9 per cent. These improvements in the profitability of the representative farm would be achieved by increasing the investment in first-cross ewes and in cows producing heavy feeder steers (by 3.5 per cent and 7.8 per cent respectively) and by decreasing the Merino wether enterprise from 1,732 to 1,672 wethers. This indicates that the prime lamb and cow enterprises, under the current assumptions of the model, are better able to utilize the farm resources available given an increase in winter pasture growth. The main conclusions from the analysis are that: Returns to equity are quite low in the Northern Tablelands livestock farming system; variable commodity prices, largely determined in world markets, result in variable levels of profitability of the farming system over time; The optimal farm plan is quite sensitive to small changes in the relative prices of the different outputs produced; In practice farm plans do not change very much as prices change, with most farms maintaining a range of cattle and sheep enterprises; Thus a "representative year" is a more realistic basis for assessing potential changes in farm plans; and new technologies can potentially have large impacts of farm profits and on the mix of resources used and outputs produced.Industrial Organization, Production Economics,