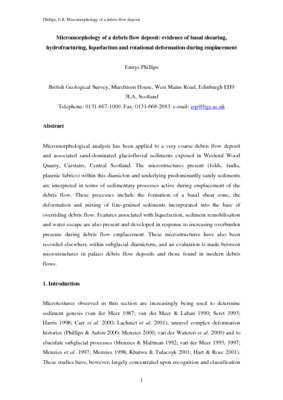 By Emrys Phillips
Get PDF (5 MB)

Micromorphological analysis has been applied to a very coarse debris flow deposit and associated sand-dominated glaciofluvial sediments exposed in Westend Wood Quarry, Carstairs, Central Scotland. The microstructures present (folds, faults, plasmic fabrics) within this diamicton and underlying predominantly sandy sediments are interpreted in terms of sedimentary processes active during emplacement of the debris flow. These processes include the formation of a basal shear zone, the deformation and mixing of fine-grained sediments incorporated into the base of overriding debris flow. Features associated with liquefaction, sediment remobilisation and water escape are also present and developed in response to increasing overburden pressure during debris flow emplacement. These microstructures have also been recorded elsewhere within subglacial diamictons, and an evaluation is made between microstructures in palaeo debris flow deposits and those found in modern debris flows