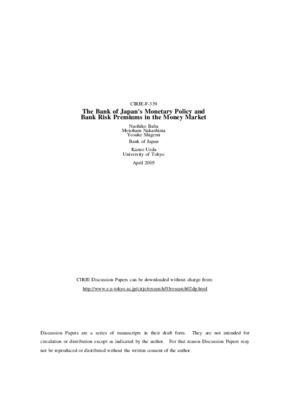 This short paper shows that under the Bank of Japan's Zero Interest Rate Policy and Quantitative Monetary Easing, not just the levels of money market rates but also the dispersion of rates across banks have fallen to near zero. Using the data on individual banks' Negotiable Certificate of Deposit rates, we first show that the dispersion of the rates among banks has fallen since 1999, the year of the adoption of the Zero Interest Rate Policy and has reached almost zero by 2004. We next show that the fall in the dispersion of the rates is not explained by a corresponding fall in the dispersion of the credit ratings of the banks. Rather, credit risk premiums seem to have disappeared in the money market. We also discuss possible relationships between this result and the Bank of Japan's monetary policy.