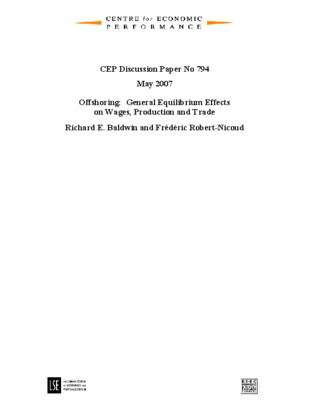 By Richard E. Baldwin and Frédéric Robert-Nicoud
Get PDF (551 KB)

A simple model of offshoring is used to integrate the complex gallery of results that exist in the theoretical offshoring/fragmentation literature. The paper depicts offshoring as 'shadow migration' and shows that this allows straightforward derivation of the general equilibrium effects on prices, wages, production and trade (necessary and sufficient conditions are provided). We show that offshoring requires modification of the four HO theorems, so econometricians who ignore offshoring might reject the HO theorem when a properly specified version held in the data. We also show that offshoring is an independent source of comparative advantage and can lead to intra-industry trade in a Walrasian setting.Offshoring, Shadow migration, Inter-industry trade, Intra-industry trade, Trade theorems