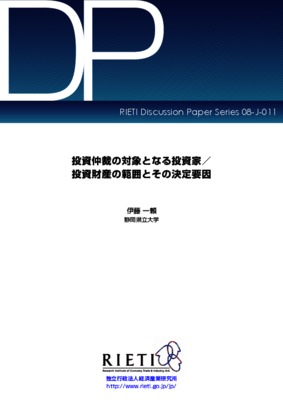 A prerequisite for receiving protection through investment arbitration for foreign investments under investment protection treaties is that the investments concerned satisfy the definitions of "investor" and "investment" in those treaties. To date, however, the interpretation of provisions concerning the definition of investors and investments has given rise to a variety of legal problems. With regard to the concept of an investor, a major point at issue is that of how to construe the nationality requirements, and in arbitral awards that have been made to date, the following two issues in particular have been disputed. (i) When the link between an investor and the investing country is weak, and in fact a national of a third country controls that investor, the point at issue is whether the said investor is qualified as a national of the investing country to file an investment arbitration claim. (ii) Even if a company is established in the recipient country, if it is controlled by a national of another country (a signatory to an investment protection treaty) it can file for investment arbitration against the recipient country on the basis of paragraph 2 (b) of Article 25 of the ICSID Convention, but the point at issue is whether simply holding shares in a local company is sufficient to constitute control as defined here (or in other words, whether a local company can file a claim even when a top parent company residing in a country that has not concluded an investment protection treaty has effective management control of the local company). On these issues the stance shown by some arbitral awards has in principle been to respect the intentions of the countries or private actors that have been party to the investment protection treaties or investment agreements, and they have recognized jurisdiction for arbitration in the above two situations unless there have been special provisions limiting the eligibility of investors for protection. Nevertheless, if a firm is established as a corporation of convenience in a country that has concluded an investment protection treaty for the sole purpose of obtaining arbitration jurisdiction, and even if the treaty contains no provisions for refusing protection to such investors, an arbitral tribunal still could exercise its own discretion to deny jurisdiction, for example by piercing the corporate veil. Therefore, although the eligibility of the investors to enjoy protection is in principle subject to the intensions of the parties to the agreements concerned, an arbitral tribunal could conclude otherwise if they were inconsistent with the object and purpose of those agreements. The same is true with regard to the concept of investment. That is, parties to an investment protection treaty can freely determine what sort of investments would fall under the treaty's protection, and can also make it a condition for protection that foreign investment must be made in accordance with the domestic rules of the recipient country. However, according to some arbitral awards, the concept of investment in Article 25 of the ICSID Convention, for example, implicitly includes objective requirements to be satisfied by all investments in order to fall within the coverage of protection, rejecting subjective modifications by the contracting states. In addition, there have been a couple of cases in which even where foreign investments violate the laws and regulations of the recipient country, and arbitral jurisdiction would have been denied if the provision of compliance with domestic rules had been applied in an automatic manner, what in fact happened was that after taking into account the circumstances of each case and the object and purpose of the investment protection agreements concerned, arbitral tribunals resorted to their own rational judgments to affirm jurisdiction. Accordingly, with regard to the concept of investment, too, the scope of protection is determined by a combination of the intentions of the parties concerned and the tribunals' original evaluations.