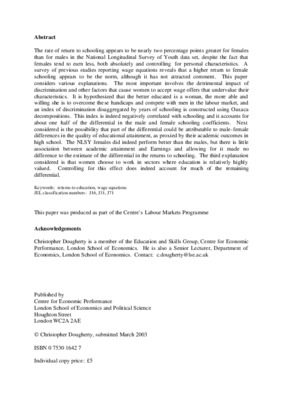 Why is the Rate of Return to Schooling Higher For Women Than For Men?

The rate of return to schooling appears to be nearly two percentage points greater for females than for males in the National Longitudinal Survey of Youth data set, despite the fact that females tend to earn less, both absolutely and controlling for personal characteristics. A survey of previous studies reporting wage equations reveals that a higher return to female schooling appears to be the norm, although it has not attracted comment. This paper considers various explanations. The most important involves the detrimental impact of discrimination and other factors that cause women to accept wage offers that undervalue their characteristics. It is hypothesized that the better educated is a woman, the more able and willing she is to overcome the se handicaps and compete with men in the labour market, and an index of discrimination disaggregated by years of schooling is constructed using Oaxaca decompositions. This index is indeed negatively correlated with schooling and it accounts for about one half of the differential in the male and female schooling coefficients. Next considered is the possibility that part of the differential could be attributable to male-female differences in the quality of educational attainment, as proxied by their academic outcomes in high school. The NLSY females did indeed perform better than the males, but there is little association between academic attainment and Earnings and allowing for it made no difference to the estimate of the differential in the returns to schooling. The third explanation considered is that women choose to work in sectors where education is relatively highly valued. Controlling for this effect does indeed account for much of the remaining differential.returns to education, wage equations