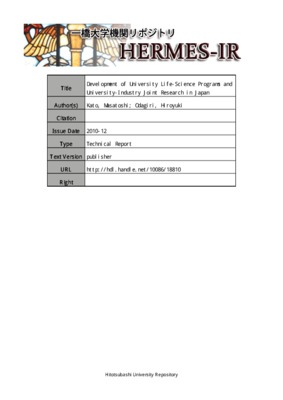 By Masatoshi Kato and Hiroyuki Odagiri
Get PDF (382 KB)

How does the establishment of new university educational programs promote university-industry joint research? To study this question for the fields of life sciences and biotechnology, we first compile the data on the establishment of new undergraduate and graduate programs in these fields in Japanese universities since the 1950s. We then analyze statistically whether and how such establishment contributed to the occurrence and frequency of university-industry joint research in biotechnology. The results suggest that, first, the expansion of such university programs in fact contributed to the promotion of university-industry joint research and, second, these collaborations increased following the 1998 legislation to promote technology transfer from universities (the so-called TLO Act) and the 1999 legislation to allow universities to retain rights on their inventions made with government research funds (the so-called Japanese Bayh-Dole Act).