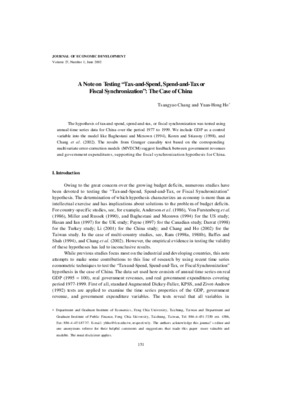 A Note on Testing ¡°Tax-and-Spend, Spend-and-Tax or Fiscal Synchronization¡±: The Case of China

The hypothesis of tax-and-spend, spend-and-tax, or fiscal synchronization was tested using annual time series data for China over the period 1977 to 1999. We include GDP as a control variable into the model like Baghestani and Mcnown (1994), Koren and Stiassny (1998), and Chang et al. (2002). The results from Granger causality test based on the corresponding multivariate error-correction models (MVECM) suggest feedback between government revenues and government expenditures, supporting the fiscal synchronization hypothesis for China.