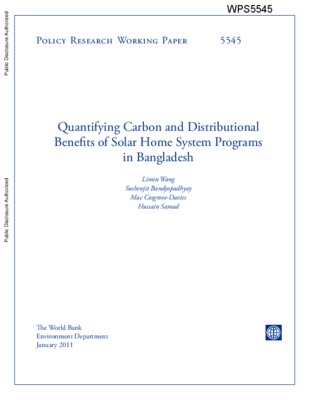 Scaling-up adoption of renewable energy technology, such as solar home systems, to expand electricity access in developing countries can accelerate the transition to low-carbon economic development. Using a purposely collected national household survey, this study quantifies the carbon and distributional benefits of solar home system programs in Bangladesh. Three key findings are generated from the study. First, dissemination of solar home systems brings about significant carbon benefits: the total carbon emissions avoided from replacing kerosene use for lighting by solar home systems in non-electrified rural households was equivalent to about 4 percent of total annual carbon emissions in Bangladesh in 2007. This figure increases to about 15 percent if the grid-electricity generation is used as the energy baseline to estimate the carbon avoided from the installation of solar home systems. Second, solar home system subsidies in rural Bangladesh are progressive when the program is geographically targeted. Third, there exists a market potential for solar home systems in many rural areas if micro-credit schemes are made available and the propensity to install solar home systems is very responsive to income, with a 1-percent increase in per capita income increasing the probability of installing solar home systems by 12 percent, controlling for other factors.Climate Change Mitigation and Green House Gases,Energy Production and Transportation,Access to Finance,Environment and Energy Efficiency,Energy and Environment