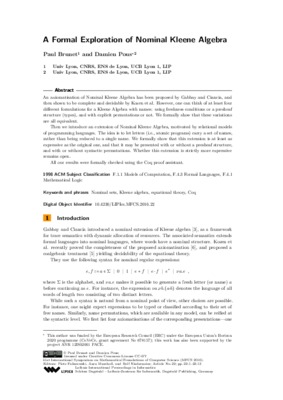 By Paul Brunet and Damien Pous
Get PDF (524 KB)

An axiomatisation of Nominal Kleene Algebra has been proposed by Gabbay and Ciancia, and then shown to be complete and decidable by Kozen et al. However, one can think of at least four different formulations for a Kleene Algebra with names: using freshness conditions or a presheaf structure (types), and with explicit permutations or not. We formally show that these variations are all equivalent. Then we introduce an extension of Nominal Kleene Algebra, motivated by relational models of programming languages. The idea is to let letters (i.e., atomic programs) carry a set of names, rather than being reduced to a single name. We formally show that this extension is at least as expressive as the original one, and that it may be presented with or without a presheaf structure, and with or without syntactic permutations. Whether this extension is strictly more expressive remains open. All our results were formally checked using the Coq proof assistant