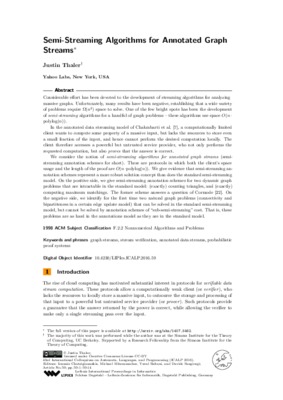 Considerable effort has been devoted to the development of streaming algorithms for analyzing massive graphs. Unfortunately, many results have been negative, establishing that a wide variety of problems require Omega(n^2) space to solve. One of the few bright spots has been the development of semi-streaming algorithms for a handful of graph problems - these algorithms use space O(n*polylog(n)). In the annotated data streaming model of Chakrabarti et al. [Chakrabarti/Cormode/Goyal/Thaler, ACM Trans. on Alg. 2014], a computationally limited client wants to compute some property of a massive input, but lacks the resources to store even a small fraction of the input, and hence cannot perform the desired computation locally. The client therefore accesses a powerful but untrusted service provider, who not only performs the requested computation, but also proves that the answer is correct. We consider the notion of semi-streaming algorithms for annotated graph streams (semistreaming annotation schemes for short). These are protocols in which both the client\u27s space usage and the length of the proof are O(n*polylog(n)). We give evidence that semi-streaming annotation schemes represent a more robust solution concept than does the standard semi-streaming model. On the positive side, we give semi-streaming annotation schemes for two dynamic graph problems that are intractable in the standard model: (exactly) counting triangles, and (exactly) computing maximum matchings. The former scheme answers a question of Cormode [Cormode, Problem 47]. On the negative side, we identify for the first time two natural graph problems (connectivity and bipartiteness in a certain edge update model) that can be solved in the standard semi-streaming model, but cannot be solved by annotation schemes of "sub-semi-streaming" cost. That is, these problems are as hard in the annotations model as they are in the standard model