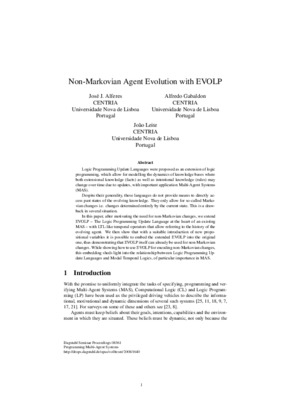 Logic Programming Update Languages were proposed as an extension of logic programming, which allow for modelling the dynamics of knowledge bases where both extensional knowledge (facts) as well as intentional knowledge (rules) may change over time due to updates, with important application Multi-Agent Systems (MAS). Despite their generality, these languages do not provide means to directly access past states of the evolving knowledge. They only allow for so-called Markovian changes i.e. changes determined entirely by the current state. This is a drawback in several situation. In this paper, after motivating the need for non-Markovian changes, we extend EVOLP -- The Logic Programming Update Language at the heart of an existing MAS -- with LTL-like temporal operators that allow referring to the history of the evolving agent. We then show that with a suitable introduction of new propositional variables it is possible to embed the extended EVOLP into the original one, thus demonstrating that EVOLP itself can already be used for non-Markovian changes. While showing how to use EVOLP for encoding non-Markovian changes, this embedding sheds light into the relationship between Logic Programming Update Languages and Modal Temporal Logics, of particular importance in MAS