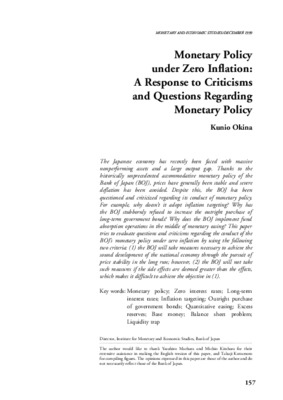 The Japanese economy has recently been faced with massive nonperforming assets and a large output gap. Thanks to the historically unprecedented accommodative monetary policy of the Bank of Japan (BOJ), prices have generally been stable and severe deflation has been avoided. Despite this, the BOJ has been questioned and criticized regarding its conduct of monetary policy. For example, why doesn't it adopt inflation targeting? Why has the BOJ stubbornly refused to increase the outright purchase of long-term government bonds? Why does the BOJ implement fund absorption operations in the middle of monetary easing? This paper tries to evaluate questions and criticisms regarding the conduct of the BOJ's monetary policy under zero inflation by using the following two criteria: (1) the BOJ will take measures necessary to achieve the sound development of the national economy through the pursuit of price stability in the long run; however, (2) the BOJ will not take such measures if the side effects are deemed greater than the effects, which makes it difficult to achieve the objective in (1).