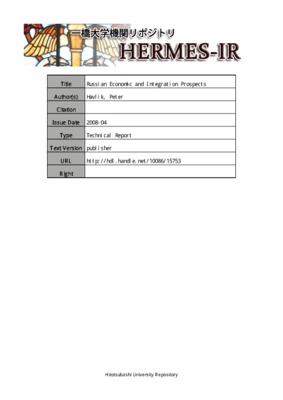 This paper provides an overview of Russian economic developments during the period 2000-2007 and analyses key patterns and drivers of the recent economic growth. The growth sustainanbility is addressed as well, in particular with respect to the role played by energy prices and the growing involvement of the state in the economy, including attempts to implement tools of industrial policy and the public-private project financing schemes. Next, the resurgence of Russia as a regional power in the Commonwealth of Independent States (CIS) and the complicated relations with the European Union (EU) after recent EU enlargements with countries from Central and Eastern Europe are addressed. The paper discusses also prospects for and challenges of the future Russian integration in the European economy and outlines alternative scenarios for a medium-term economic outlook. Finally, the likely policies of the new Russian President Dmitry Medvedev are briefly discussed as well.Russia, economic growth, energy, European integration, economic forecast