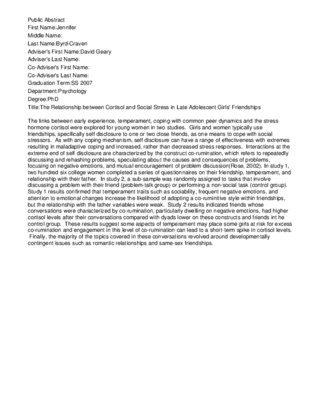 The entire dissertation/thesis text is included in the research.pdf file; the official abstract appears in the short.pdf file (which also appears in the research.pdf); a non-technical general description, or public abstract, appears in the public.pdf file.Title from title screen of research.pdf file (viewed on November 26, 2007)Vita.Thesis (Ph. D.) University of Missouri-Columbia 2007.The potential mechanisms linking early experience and temperament to coping with common peer dynamics and the stress hormone cortisol were explored for young women in two studies. Girls and women typically use friendships, specifically dyadic self-disclosure, as one means to cope with social stressors. As with any coping mechanism, self disclosure can have a range of effectiveness, with extremes resulting in maladaptive coping and increased, rather than decreased stress responses. Interactions at the extreme end of dyadic self-disclosure are characterized by the construct co-rumination, which refers to repeatedly discussing and rehashing problems, speculating about the causes and consequences of the problems, focusing on negative affect, and mutual encouragement of problem discussion (Rose, 2002). In study 1, two hundred six college women completed a series of questionnaires on their friendship, temperament, and relationship with their father. In study 2, a sub-sample was randomly assigned to tasks that involve discussing a problem with their friend (problem-talk group) or performing a non-social task (control group). Study 1 results confirmed that temperament traits such as high sociability, negative affect, and attention to affective changes increase the likelihood of adopting a co-ruminative social style within friendships, but the relation with father variables was weak. Study 2 results indicated dyads whose conversations were characterized by co-rumination, particularly dwelling on negative affect, had higher cortisol levels after their conversations compared with dyads lower on these constructs and dyads in the control group. These results suggest some aspects of temperament may place some girls at risk for excess co-rumination and engagement in this level of co- rumination can lead to a short-term spike in cortisol levels. Finally, the majority of the content of these conversations revolved around developmentally contingent issues such as male choice and same-sex friendships.Includes bibliographical reference