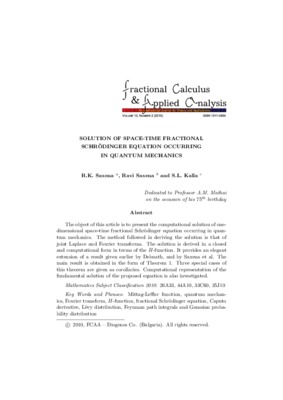 Dedicated to Professor A.M. Mathai on the occasion of his 75-th birthday. Mathematics Subject Classi¯cation 2010: 26A33, 44A10, 33C60, 35J10.The object of this article is to present the computational solution of one-dimensional space-time fractional Schrödinger equation occurring in quantum mechanics. The method followed in deriving the solution is that of joint Laplace and Fourier transforms. The solution is derived in a closed and computational form in terms of the H-function. It provides an elegant extension of a result given earlier by Debnath, and by Saxena et al. The main result is obtained in the form of Theorem 1. Three special cases of this theorem are given as corollaries. Computational representation of the fundamental solution of the proposed equation is also investigated