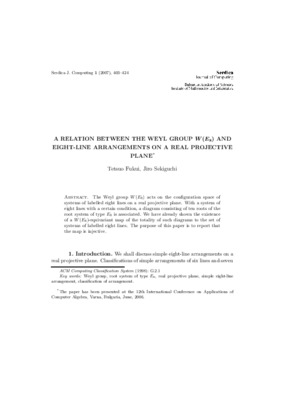 By Tetsuo Fukui and Jiro Sekiguchi
Get PDF (228 KB)

The paper has been presented at the 12th International Conference on Applications of Computer Algebra, Varna, Bulgaria, June, 2006.The Weyl group W(E8) acts on the con guration space of systems of labelled eight lines on a real projective plane. With a system of eight lines with a certain condition, a diagram consisting of ten roots of the root system of type E8 is associated. We have already shown the existence of a W(E8)-equivariant map of the totality of such diagrams to the set of systems of labelled eight lines. The purpose of this paper is to report that the map is injective