The poem is unsigned and is not divided into stanzas. It mentions General Brock, General Dearborn, Sir Peregrine, Fort George and the militia men of Lincoln. General Isaac Brock was a British Army officer and administrator who was promoted to Major General. He was responsible for defending Upper Canada against the United States. He died at the Battle of Queenston Heights during the War of 1812. In 1812, Dearborn was in charge of the northeastern sector from Niagara to the New England coast in his role as senior Major General of the U.S. Army. Dearborn proved that he was neither psychologically nor physically fit enough to take control. He tried to persuade New England governors to allow their militia to be used to invade Canada. He was not successful in his quest and no major offensive was launched against Lower Canada. Sir Peregrine probably refers to Sir Peregrine Maitland who was appointed as the Lieutenant Governor of Upper Canada in 1818. Fort George is located in Niagara-on-the-Lake, Ontario. It was the site of several battles during the War of 1812. The Lincoln Militia fought in battles on the Niagara Peninsula and the eastern shores of the Niagara River in the War of 1812.1 poem on a piece of newsprint measuring 39 cm. in length by 12 cm. in width 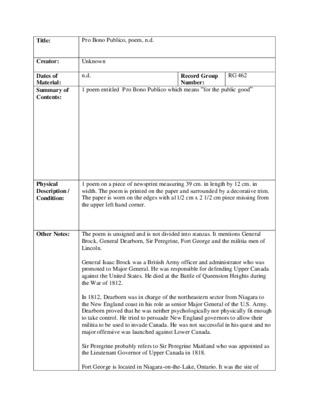 This paper was published in Brock University Digital Repository.