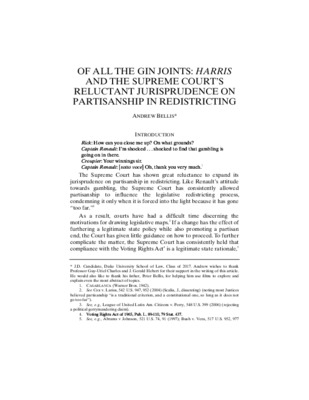 Of all the Gin Joints: Harris and the Supreme Court’s Reluctant Jurisprudence on Partisanship in Redistricting

As interpreted by the Supreme Court, the Fourteenth Amendment’s Equal Protection Clause protects the voting power of citizens. Thus, drawing state legislative districts resulting in dilution of citizens’ voting power may violate the Constitution. However, the question of what factors a state may take into account when redistricting has not been settled. In the upcoming Supreme Court case of Harris v. Arizona Independent Redistricting Commission, the Court faces the question of whether partisan makeup of the population and whether an attempt by a state to obtain federal preclearance for redistricting are valid factors a state can take into account when redrawing state legislative districts. This Commentary argues that the Court should pass on the question of partisanship as a factor but hold that an attempt to obtain federal preclearance is permissible grounds for deviating from the one-person, one-vote standard