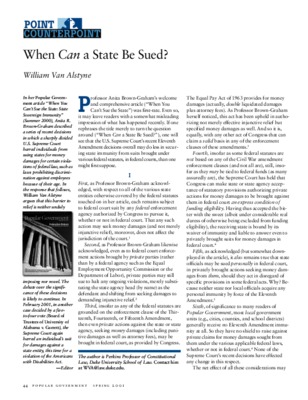 When Can a State Be Sued?

In her Popular Government article When You Can\u27t Sue the State: State Sovereign Immunity (Summer 2000), Anita R. Brown-Graham described a series of recent decisions in which a sharply divided U.S. Supreme Court barred individuals from suing states for money damages for certain violations of federal law, such as laws prohibiting discrimination against employees because of their age. In the response that follows, William Van Alstyne argues that this barrier to relief is neither unduly imposing nor novel. The debate over the significance of these decisions is likely to continue. In February 2001, in another case decided by a five-to-four vote (Board of Trustees of University of Alabama v. Garrett), the Supreme Court again barred an individual\u27s suit for damages against a state entity, this time for a violation of the Americans with Disabilities Act