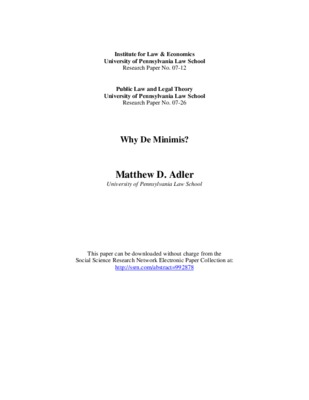 De minimis cutoffs are a familiar feature of risk regulation. This includes the quantitative individual risk thresholds for fatality risks employed in many contexts by EPA, FDA, and other agencies, such as the 1-in-1 million lifetime cancer risk cutoff; extreme event cutoffs for addressing natural hazards, such as the 100 - year - flood or 475 - year - earthquake; de minimis failure probabilities for built structures; the exclusion of low - probability causal models; and other policymaking criteria. All these tests have a common structure, as I show in the Article. A de minimis test, broadly defined, tells the decisionmaker to determine whether the probability of some outcome is above a low threshold and makes this determination relevant, in some way, to her choice. De minimis cutoffs are deeply problematic, and have been generally misunderstood by scholars. First, they are warranted - if at all - by virtue of policymakers\u27 bounded rationality. If policymakers were fully rational, de minimis cutoffs would have no justification. (This is true, I suggest, across a wide range of normative theories, and for the full gamut of de minimis tests). Second, although it seems plausible that some de minimis tests are justified once bounded rationality is brought into the picture, it is not clear which those are, or even how we should go about identifying them