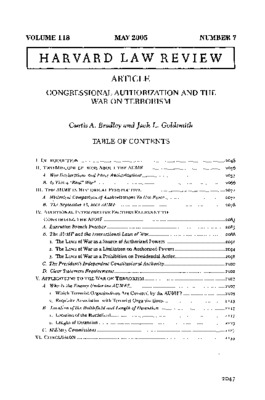 Congressional Authorization and the War on Terrorism

By Curtis A. Bradley and Jack L. Goldsmith
Get PDF (6 MB)

This Article presents a framework for interpreting Congress\u27s September 18, 2001 Authorization for Use of Military Force (AUMF), the central statutory enactment related to the war on terrorism. Although both constitutional theory and constitutional practice suggest that the validity of presidential wartime actions depends to a significant degree on their relationship to congressional authorization, the meaning and implications of the AUMF have received little attention in the academic debates over the war on terrorism. The framework presented in this Article builds on the analysis in the Supreme Court\u27s plurality opinion in Hamdi v. Rumsfeld, which devoted significant attention to the AUME Under that framework, the meaning of the AUMF is determined in the first instance by its text, as informed by a comparison with authorizations of force in prior wars, including declared wars. In ascertaining the scope of the necessary and appropriate force that Congress authorized in the AUMF, courts should look to two additional interpretive factors: Executive Branch practice during prior wars, and the international laws of war. Although nondelegation concerns should not play a significant role in interpreting the AUMF, a clear statement requirement is appropriate when the President takes actions under the AUMF that restrict the liberty of non-combatants in the United States. The authors apply this framework to three specific issues in the war on terrorism: the identification of the enemy, the detention of persons captured in the United States, and the validity of using military commissions to try alleged terrorists