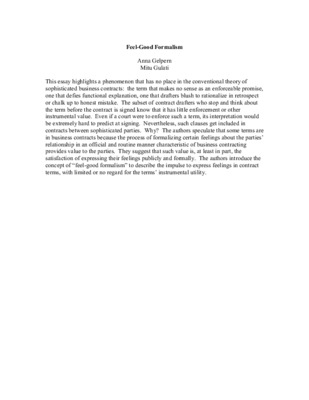 By Mitu Gulati and Anna Gelpern
Get PDF (136 KB)

This essay highlights a phenomenon that has no place in the conventional theory of sophisticated business contracts: the term that makes no sense as an enforceable promise, one that defies functional explanation, one that drafters blush to rationalize in retrospect or chalk up to honest mistake. The subset of contract drafters who stop and think about the term before the contract is signed know that it has little enforcement or other instrumental value. Even if a court were to enforce such a term, its interpretation would be extremely hard to predict at signing. Nevertheless, such clauses get included in contracts between sophisticated parties. Why? The authors speculate that some terms are in business contracts because the process of formalizing certain feelings about the parties’ relationship in an official and routine manner characteristic of business contracting provides value to the parties. They suggest that such value is, at least in part, the satisfaction of expressing their feelings publicly and formally. The authors introduce the concept of “feel-good formalism” to describe the impulse to express feelings in contract terms, with limited or no regard for the terms’ instrumental utility