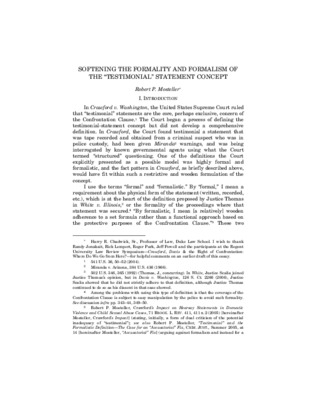 Softening the Formality and Formalism of the “Testimonial” Statement Concept

In Crawford v. Washington (2004), the United States Supreme Court ruled that “testimonial” statements are the core, perhaps exclusive, concern of the Confrontation Clause. The Court began a process of defining the testimonial-statement concept but did not develop a comprehensive definition. In Crawford, the Court concluded that a statement was testimonial, which was tape recorded and obtained from a criminal suspect who was in police custody, had been given warnings under Miranda v. Arizona (1966), and was being interrogated by known governmental agents using what the Court termed “structured” questioning. One of the definitions the Court explicitly presented as a possible model was highly formal and formalistic, and the fact pattern in Crawford, as briefly described above, would have fit within such a restrictive and wooden formulation of the concept. I use the terms formal and formalistic. By formal, I mean a requirement about the physical form of the statement (written, recorded, etc.), which is at the heart of the definition proposed by Justice Thomas in White v. Illinois (1992), and/or the formality of the proceedings where that statement was secured. By formalistic, I mean a relatively wooden adherence to a set formula rather than a functional approach based on the protective purposes of the Confrontation Clause. These two concepts are related but distinct: in my view, neither excessive formality nor formalism are demanded by Crawford nor are they consistent with its basic intuition about the role of the Clause. In Davis v. Washington (2006), the Court applied the Crawford testimonial-statement approach to two additional types of statements, one of which it found to be within the definition and the other outside it. The Court again declined to provide a comprehensive definition of the concept, and it left a large number of questions unanswered about its dimensions. However, it did reject some of the most formal and formalistic elements of what was possible after Crawford. Davis gave us a somewhat softened definition for the testimonial statement concept. Specifically, its holding and the additional explanatory language of Justice Scalia’s opinion for the eight-justice majority, often in direct or implicit response to Justice Thomas’ dissent advocating adherence to formality, has softened the formality of the definition. Davis’ expanded coverage and the modest flexibility it allows in applying the professed definition has also had the effect of softening its formalism. Both developments are quite positive, but unfortunately the opinions leave it entirely unclear whether the Court will continue in this direction. These changes in the formality and formalism of the testimonial statement concept and their implications are the subject of this essay. My analysis also leads to some further general observations. I question whether the term “testimonial” accurately describes the definition the Court is developing and whether that definition is as faithful to textual and originalist sources as Justice Scalia insists