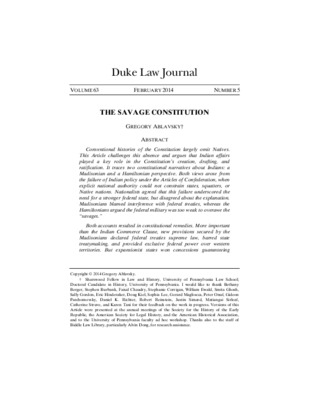 Conventional histories of the Constitution largely omit Natives. This Article challenges this absence and argues that Indian affairs played a key role in the Constitution\u27s creation, drafting, and ratification. It traces two constitutional narratives about Indians: a Madisonian and a Hamiltonian perspective. Both views arose from the failure of Indian policy under the Articles of Confederation, when explicit national authority could not constrain states, squatters, or Native nations. Nationalists agreed that this failure underscored the need for a stronger federal state, but disagreed about the explanation. Madisonians blamed interference with federal treaties, whereas the Hamiltonians argued the federal military was too weak to overawe the savages. Both accounts resulted in constitutional remedies. More important than the Indian Commerce Clause, new provisions secured by the Madisonians declared federal treaties supreme law, barred state treatymaking, and provided exclusive federal power over western territories. But expansionist states won concessions guaranteeing federal protection and western land claims, while other provisions created a fiscal-military state committed to western expansion. The two narratives fared differently during ratification. While few embraced centralization, many Federalists repeatedly invoked savages to justify a stronger federal state and a standing army. This argument swayed Georgia, which ratified to secure federal aid in its ongoing war with the Creek Indians. But it also elevated the dispossession of Natives into a constitutional principle. The Article concludes by exploring this history\u27s interpretive implications. It suggests the Indian affairs context unsettles conventional understandings of the Constitution as intended to restrain the power of the state, and challenges both originalist and progressive assumptions about constitutional history