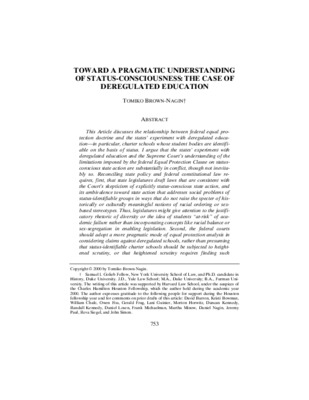 Toward a Pragmatic Understanding of Status-Consciousness: The Case of Deregulated Education

This Article discusses the relationship between federal equal protection doctrine and the states\u27 experiment with deregulated education-in particular, charter schools whose student bodies are identifiable on the basis of status. I argue that the states\u27 experiment with deregulated education and the Supreme Court\u27s understanding of the limitations imposed by the federal Equal Protection Clause on status-conscious state action are substantially in conflict, though not inevitably so. Reconciling state policy and federal constitutional law requires, first, that state legislatures draft laws that are consistent with the Court\u27s skepticism of explicitly status-conscious state action, and its ambivalence toward state action that addresses social problems of status-identifiable groups in ways that do not raise the specter of historically or culturally meaningful notions of racial ordering or sex-based stereotypes. Thus, legislatures might give attention to the justificatory rhetoric of diversity or the idea of students at-risk of academic failure rather than incorporating concepts like racial balance or sex-segregation in enabling legislation. Second, the federal courts should adopt a more pragmatic mode of equal protection analysis in considering claims against deregulated schools, rather than presuming that status-identifiable charter schools should be subjected to heightened scrutiny, or that heightened scrutiny requires finding such schools unconstitutional. A more pragmatic mode of constitutional analysis is justified by the public and private features of deregulated schools, which, I propose, entitle some schools to be considered quasi-public. It is also justified by the Court\u27s precedent on federalism and education, which should be understood as consistent with state legislators\u27 purpose in deregulating schools-encouraging innovative approaches to learning through participatory democracy