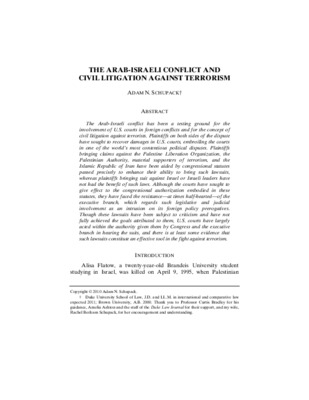 The Arab-Israeli Conflict and Civil Litigation against Terrorism

The Arab-Israeli conflict has been a testing ground for the involvement of U.S. courts in foreign conflicts and for the concept of civil litigation against terrorists. Plaintiffs on both sides of the dispute have sought to recover damages in U.S. courts, embroiling the courts in one of the world\u27s most contentious political disputes. Plaintiffs bringing claims against the Palestine Liberation Organization, the Palestinian Authority, material supporters of terrorism, and the Islamic Republic of Iran have been aided by congressional statutes passed precisely to enhance their ability to bring such lawsuits, whereas plaintiffs bringing suit against Israel or Israeli leaders have not had the benefit of such laws. Although the courts have sought to give effect to the congressional authorization embodied in these statutes, they have faced the resistance at times half-hearted of the executive branch, which regards such legislative and judicial involvement as an intrusion on its foreign policy prerogatives. Though these lawsuits have been subject to criticism and have not fully achieved the goals attributed to them, U.S. courts have largely acted within the authority given them by Congress and the executive branch in hearing the suits, and there is at least some evidence that such lawsuits constitute an effective tool in the fight against terrorism