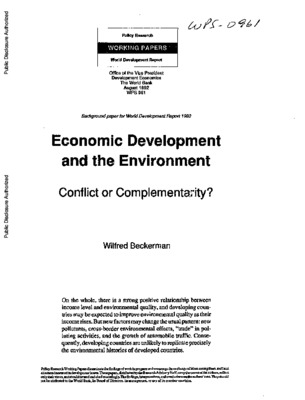 Economic development and the environment : conflict of complementarity?

By Wilfred Beckerman
Get PDF (3 MB)

Although, in the course of development some features of the environment in developing countries may get worse, in the longer run they will be able to reverse trends in more common forms of air pollution and to attain levels of water supply and sanitation essential to an acceptable, healthy standard of living. On the whole, says the author, there is a strong positive relationship between income level and environmental quality. In the developed countries, effective measures to combat urban air pollution were introduced only when it had reached almost intolerable levels in many cities. This does not mean that as countries develop they will replicate precisely the environmental histories of developed countries. The path of environmental pollution in the developing world today will probably differ from that of the past in at least four respects: (1) Changes in technology, relative prices, patterns of output, and policies mean that although traditional pollutants have been brought under control in many (mainly developed) countries, the world is faced with newer pollutants, or with old pollutants that, on account of their scale or accumulation, have acquired new significance. (2) The global character of many pollutants is becoming more serious. Today, even leaving aside the issues of global warming and ozone depletion, there is evidence of serious regional environmental effects of acid rain and of marine or riverine pollution. (3) International trade in polluting activities adds a relatively new element. Developing countries may suffer not only from their own pollution but also from imported pollution, as enterprises shift their more polluting activities from countries with strict controls to countries in which environmental considerations do not have a high priority. Today, the fast growth of automobile traffic means that emissions of carbon monoxide or nitrous oxides have become a serious problem; in the past, the chief form of urban pollution was dense sulfur dioxide, or smoke.Water and Industry,Town Water Supply and Sanitation,Urban Services to the Poor,Urban Services to the Poor,Environmental Economics&Policies