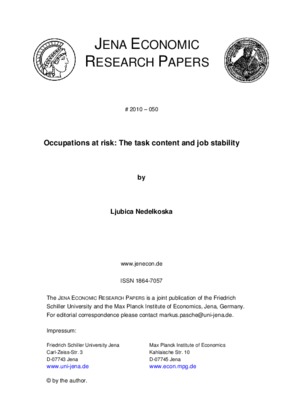 Occupations at risk: The task content and job stability

By Ljubica Nedelkoska
Get PDF (2 MB)

In the last few decades, Germany, similar to other developed countries, has been witnessing a sharp decline of the jobs that used to constitute the middle-class of the 1970s and the 1980s. This decline has been associated with the level to which jobs are codifiable. This is because, some argue, codifiable tasks are more prone to technological substitution and outsourcing than tacit tasks. This article empirically investigates two crucial aspects of the decline of codified jobs. First, it studies what happened to the workers in codified occupations in terms of unemployment, occupational change, and wages. Second, it revisits the hypothesis that code-based technologies are the major driver of this labour market shift. We find that job codification is associated with higher unemployment and higher occupational change. It is also associated with wage losses for the workers who left routinized jobs. We find however little evidence that code-based technologies were the driving factor behind these dynamics.occupations, automation, job tasks, occupational change, unemployment, wages