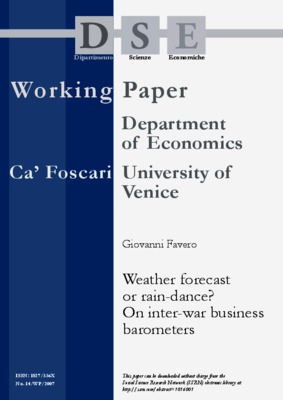 In this paper, I use the materials of the debate on the reliability and the utility of “business barometers” of the Twenties in order to show that the theoretical reflexions of the time could be used by economic historians as a working hypothesis to analyze the influence exerted by circulating statistical data on the decisions of economic operators and institutions. I offer a short illustration of the origins and circulation of economic trends forecasting in the first decades of 20th century, paying particular attention to the critical attitude shown by Corrado Gini and Oskar Morgenstern and to the debate arisen inside the Harvard Committee for Economic Research on the inefficiency of its “index of economic conditions” during the 1929 crisis. I finally suggest that thorough research on the circulation and the influence exerted by the Harvard index on the business world, still after the slump in prices of New York Stock Exchange, could contribute to explain the behaviour of American businessmen and investors during the first Thirties, and the deepening of the crisis.Economic forecasts, 1930s crisis, US