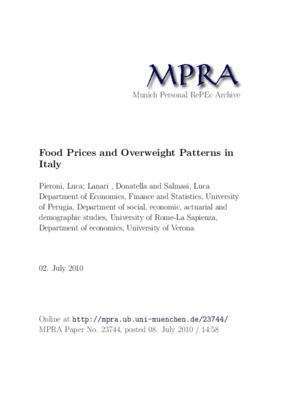 In this paper we examine the role of relative food prices in determining the recent increase in body weight in Italy. Cross-price elasticities of unhealthy and healthy foods estimated by a demand system provide a consistent framework to evaluate substitution effects, when a close association is assumed between unhealthy (healthy) foods and more (less) energy-dense foods. We used a dataset constructed from a series of cross-sections of the Italian Household Budget Survey (1997-2005) to obtain the variables of the demand system, which accounts for regional price variability. The relative increase of healthy food prices was found to produce nontrivial elasticities of substitution towards higher relative consumption of unhealthy foods, with effects on weight outcomes. In addition, these changes were unevenly distributed among individuals and were particularly significant for those who were poorer and had less education.Household Survey Data; Healthy and Unhealthy Foods; Overweight and Obesity; Elasticity of Substitution