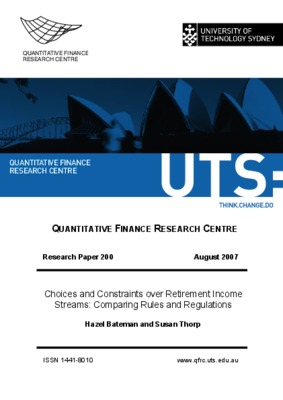 By Hazel Bateman and Susan Thorp
Get PDF (391 KB)

The new Simplified Superannuation regulations for Australian superannuation provide tax concessions to retirement income streams which comply with legislated minimum drawdown rules. We evaluate these new drawdown rules against four alternatives, including three formula-based ‘rules of thumb’ and the previous legislated minimum drawdown limits for allocated pensions. We find that the new regulations are a substantial improvement on the previous rules for allocated pensions and, when compared with the four formula-based rules, are a good compromise in terms of simplicity, adequacy and risk. We also find that welfare is lower for most individuals who follow the Simplified Superannuation compared with welfare under an optimal path or a simple fixed percentage drawdown rule, but that outcomes could be improved through a further simplification of the rules.