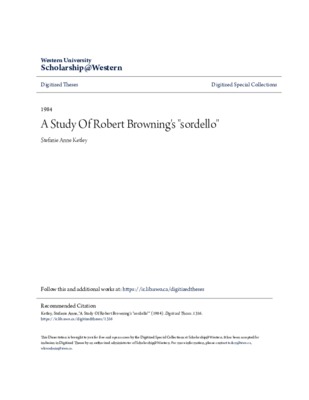 Readers of Sordello have insufficiently appraised Browning\u27s use of a late-medieval, early-Renaissance setting to express his nineteenth-century themes. They tend either to dismiss the poem\u27s historical details in favour of its nineteenth-century implications, or to exaggerate Browning\u27s interest in the Italian Renaissance at the expense of his nineteenth-century concerns. The thesis argues that although Browning is reasonably accurate about historical details, a greater concern is to illustrate the continuities between historical periods determined by universal human inclinations and experiences, and by the continuities of God\u27s providential ways.;Other Victorians\u27 historical writings tended either to idealize or repudiate the Middle Ages or the Renaissance, and to question the potential of the nineteenth century. The thesis argues that Browning in Sordello, with its late-medieval, early-Renaissance setting, persuades readers to temper these idealizations and repudiations by affirming the progressive efforts of men throughout history to respond to the Eden tale of human experience.;In addition to the discussion of Sordello\u27s setting in Chapter One, the thesis tries to resolve critical problems with distinctions to be made between Browning, Sordello, and the narrator. It is argued that both the thirteenth-century Sordello and the nineteenth-century narrator are represented as developing, fallible poets who illustrate responses to human experience and poetry Browning sees as characteristic of the thirteenth and nineteenth centuries. Sordello represents some thirteenth- and nineteenth-century extremes of Neoplatonic idealism and libertinism; the narrator is a Christian-humanist poet whose attitudes towards the end of the poem approximate those of Browning.;These arguments are developed in chapters analyzing the poem\u27s three main themes: Chapter Two discusses Browning\u27s affirmation of secular love which is based on temporal service rather than on other-worldly ideals; in Chapter Three, Browning\u27s awareness of and response to religious problems in the 1830\u27s is examined; Chapter Four explains the discriminations made in Sordello between a mystical, prophetic poetry characteristic of some Italian Renaissance and nineteenth-century poetry, and the dramatic poetry characteristic of the English Renaissance which Browning affirms and develops