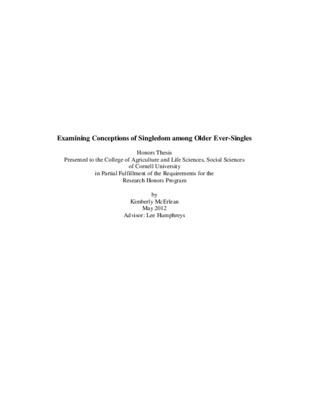 By Kimberly McErlean
Get PDF (318 KB)

With an aging population, the host of alternatives to marriage, and the number of people who remain single, ever-single older adults are an important group to understand and their responses can be valuable in helping senior living communities and others work with and provide for this segment of the population. This article draws from interviews with 12 ever-single men and women between the ages of 65 and 87 to explore their changing perspectives of themselves as ever-single, the positives and negatives they perceive with their status, and the social norms surrounding relationships. Many of the participants saw their singlehood as a process and something that opened up opportunities for them that might not have been possible had they been married. Singlehood was seen as having both upsides—such as independence—and downsides—such as lack of companionship—but all participants expressed happiness with the way their lives had turned out. While many participants indicated that marriage was an expectation in the times that they were growing up and that remaining single used to be stigmatized, almost all respondents suggested that society was moving towards acceptance of alternative lifestyles to marriage. The responses from the interviewees illustrate the process involved with being and becoming a single adult