Forest decline and increasing tree mortality are of global concern and the identification of the causes is necessary to develop preventive measures. Global warming is an emerging factor responsible for the increasing tree mortality in drought-prone ecosystems. In the southwestern Iberian Peninsula, Mediterranean holm oak open woodlands currently undergo large-scale population-level tree die-off. In this region, temperature and aridity have increased during recent decades, but the possible role of climate change in the current oak mortality has not been investigated. To assess the role of climate change in oak die-off in managed open woodlands in southwestern Spain, we analyzed climate change-related signals in century-long tree ring chronologies of dead holm oaks. We examined the high/lowfrequency variability in growth and the relationship between growth and climate. Similar to other Mediterranean forests, growth was favored by precipitation from autumn of the year prior to ring formation to spring of the year of ring formation, whereas high temperatures during spring limited growth. Since the 1970s, the intensity of the high-frequency response to water availability increased simultaneously with temperature and aridity. The growth trends matched those of climatic changes. Growth suppressions occurred during droughts in the 1970s, 1980s and 1990s. Widespread stand-level, age-independent mortality occurred since 2005 and affected trees that can not be considered old for the species standards. The close relationship between growth and climate indicate that climate change strongly controlled the growth patterns. This suggests that harsher climatic conditions, especially increased aridity, affected the tree performance and could have played a significant role in the mortality process. Climate change may have exacerbated or predisposed trees to the impact of other factors (e.g. intense management and pathogens). These observations could suggest a similar future increase in oak mortality which may occur in more northern oak open woodlands if aridity further increases.This study was supported by the Department of Innovation, Science and Business of the Regional Government of Andalusia, Spain (project ref: P07RNM02688), the Spanish Ministry of Economy and Competitiveness, the European Union (FEDER funds), the Spanish National Agriculture Research Institute (project ref: RTA2013-00011-C02-02), and the International Campus of Excellence for Environment, Biodiversity and Global Change (CeiCambio). FN thanks E. Garriga (CIFOR-INIA) and D. Martin Perez for help with sample collection and processing. The authors acknowledge the Environmental Council in Huelva and the staff of the Department for Environment of the Government of Andalusia for their assistance in locating study sites. Ulf Buntgen (WSL, Birmensdorf, Switzerland) provided useful suggestions to improve a previous version of the manuscript 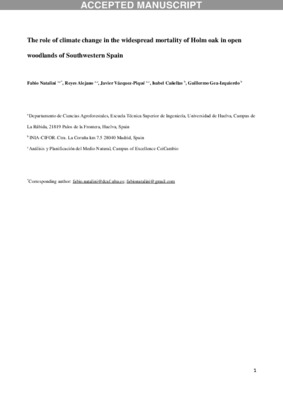 Arias Montano: Institutional Repository of the University of Huelva

This paper was published in Arias Montano: Institutional Repository of the University of Huelva.