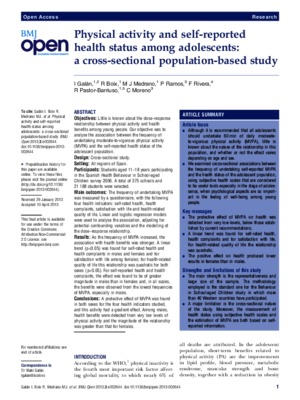 Objectives: Little is known about the dose–response relationship between physical activity and health benefits among young people. Our objective was to analyse the association between the frequency of undertaking moderate-to-vigorous physical activity (MVPA) and the self-reported health status of the adolescent population. Design: Cross-sectional study. Setting: All regions of Spain. Participants: Students aged 11–18 years participating in the Spanish Health Behaviour in School-aged Children survey 2006. A total of 375 schools and 21 188 students were selected. Main outcomes: The frequency of undertaking MVPA was measured by a questionnaire, with the following four health indicators: self-rated health, health complaints, satisfaction with life and health-related quality of life. Linear and logistic regression models were used to analyse the association, adjusting for potential confounding variables and the modelling of the dose–response relationship. Results: As the frequency of MVPA increased, the association with health benefits was stronger. A linear trend (p<0.05) was found for self-rated health and health complaints in males and females and for satisfaction with life among females; for health-related quality of life this relationship was quadratic for both sexes ( p<0.05). For self-reported health and health complaints, the effect was found to be of greater magnitude in males than in females and, in all scales, the benefits were observed from the lowest frequencies of MVPA, especially in males. Conclusions: A protective effect of MVPA was found in both sexes for the four health indicators studied, and this activity had a gradient effect. Among males, health benefits were detected from very low levels of physical activity and the magnitude of the relationship was greater than that for females.g This study has been funded by the Consejo Superior de Deportes (National Sports Council) and the Ministerio de Sanidad, Servicios Sociales e Igualdad (Ministry of Health and Social Policy