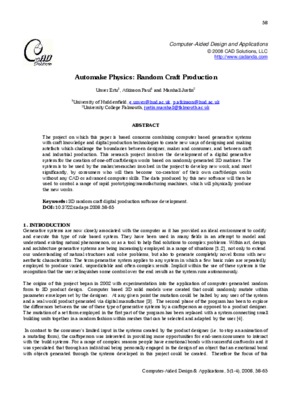 The project on which this paper is based concerns combining computer based generative systems with craft knowledge and digital production technologies to create new ways of designing and making artefacts which challenge the boundaries between designer, maker and consumer, and between craft and industrial production. This research project involves the development of a digital generative system for the creation of one-off craft/design works based on randomly generated 3D matrices. The system is to be used by the maker/researcher involved in the project to develop new work, and most significantly, by consumers who will then become ‘co-creators’ of their own craft/design works without any CAD or advanced computer skills. The data produced by this new software will then be used to control a range of rapid prototyping/manufacturing machines, which will physically produce the new works