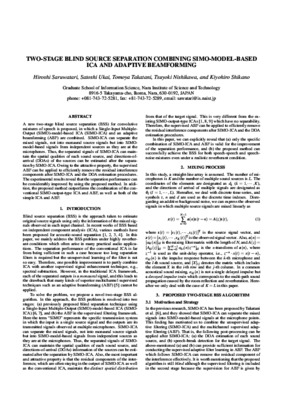 EUSIPCO2005: the 13th European Signal Processing Conference, September 4-8, 2005, Antalya, Turkey.A new two-stage blind source separation (BSS) for convolutive mixtures of speech is proposed, in which a Single-Input Multiple-Output (SIMO)-model-based ICA (SIMO-ICA) and an adaptive beamforming (ABF) are combined. SIMO-ICA can separate the mixed signals, not into monaural source signals but into SIMO-model-based signals from independent sources as they are at the microphones. Thus, the separated signals of SIMO-ICA can maintain the spatial qualities of each sound source, and directions-of-arrival (DOAs) of the sources can be estimated after the separation by SIMO-ICA. Owing to the attractive property, the supervised ABF can be applied to efficiently remove the residual interference components after SIMO-ICA and the DOA estimation procedures. The experimental results reveal that the separation performance can be considerably improved by using the proposed method. In addition, the proposed method outperforms the combination of the conventional SIMO-output-type ICA and ABF, as well as both of the simple ICA and ABF