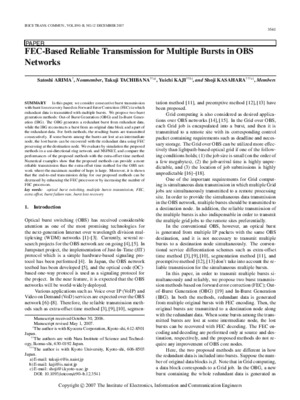 In this paper, we consider consecutive burst transmission with burst loss recovery based on Forward Error Correction (FEC) in which redundant data is transmitted with multiple bursts. We propose two burst generation methods: Out-of Burst Generation (OBG) and In-Burst Generation (IBG). The OBG generates a redundant burst from redundant data, while the IBG reconstructs a burst from an original data block and a part of the redundant data. For both methods, the resulting bursts are transmitted consecutively. If some bursts among the bursts are lost at an intermediate node, the lost bursts can be recovered with the redundant data using FEC processing at the destination node. We evaluate by simulation the proposed methods in a uni-directional ring network and NSFNET, and compare the performances of the proposed methods with the extra-offset time method. Numerical examples show that the proposed methods can provide a more reliable transmission than the extra-offset time method for the OBS network where the maximum number of hops is large. Moreover, it is shown that the end-to-end transmission delay for our proposed methods can be decreased by enhancing the FEC processor or by increasing the number of FEC processors