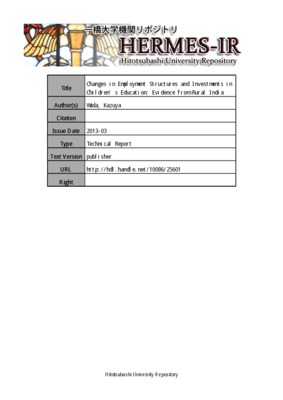 Changes in Employment Structures and Investments in Children’s Education: Evidence from Rural India

This study investigates the effects of changes in non-agricultural sectors in India on investments in children's education. By using data from the Census of India (1981, 1991, and 2001) and the India Human Development Survey 2005 (IHDS), this study seeks to capture changes in Indian economic situation for the two decades between 1981 and 2001 and examine the effects of those changes on children's educational attainments in 2005. The results of empirical analysis suggest that changes in the first and second decades have different characteristics in terms of expansion among the non-agricultural sectors. In addition, estimation results imply that the expansion of non-agricultural sectors in the 1990s have had positive effects on investments in girls' education, leading to the alleviation of gender disparity in education. However, it should be noted that such expansion may aggravate income inequality in the future because it adversely affects children from poor households.基盤研究(S) = Grants-in-Aid for Scientific Research (S)32 p